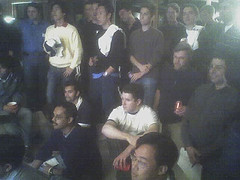 Tuned-in to Pandora at TechCrunch
Originally uploaded by lyndon.

I headed over to the TechCrunch BBQ (#3)last night, in part to find out what all the fuss was about, and to see how the audience might respond to the Pandora demo. This fuzzy cell phone photo captures the attention Pandora attracted. Everbody appreciates a personal DJ at your service 24/7, spinning tunes you love and catering to your every wish. Pandora does just that via a practical AI implementation matched with a zen-simple user interface.

Tom Conrad closed his demo thanking OpenLaszlo, the GUI technology behind Pandora, and gesturing toward Jim Grandy and I. That was most thoughtful of him, and we were surprised by the spontaneous ovation.

Without doubt, the gracious tone of the whole event was set by the hosts and organizers – from opening up their residence, to creating an event t-shirt, and serving food and beverages for 200 strangers. With more gatherings such as this one, Web 2.0 may prove to be a more social version of the original Web boom, in several senses of the word.