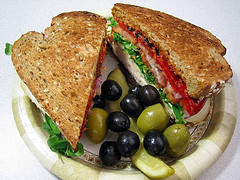 … then this flickr feed is my self-portrait in the making:

I recently volunteered to subject my eating habits to analysis as part of a sports nutritional study. I’ve never known much about the topic, other than the notion of fueling up on carbohydrates before endurance activities like long runs.

To minimize the tedium of recording every little thing I ate, I had the brilliant idea of photographing my food (…a picture can capture a thousand calories in an instant, and digital cameras make it viable to record everything). Of course, vanity quickly set in, and I started to:

2. leave out photos of some between-meal snacks

OK, so I cheated, just slightly… but overall, my little experiment hints at one of the many potential benefits of leading a transparent life, aided by social software. Imagine if all of us had photo streams of our daily food intake… and concerned friends, strangers, and nutritionists weighed in with comments.

Since the public appetite for ‘reality media’ seems quite high, this could one day trump watching silly television shows. I personally would love to follow what Lance Armstrong eats week-in and week-out.