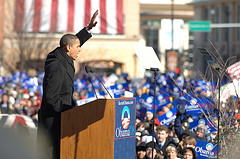 A Yahoo staffer noted this recently… Barack Obama, or more likely his campaign team, has established a flickr photo feed to cover his campaign for the U.S. presidency. Here, he announces his candidacy to the residents of Springfield, Illinois — poetically associating himself with Abraham Lincoln.

I suspect of all the presidential aspirants, he will be covered most extensively by user-generated content and various social media systems.